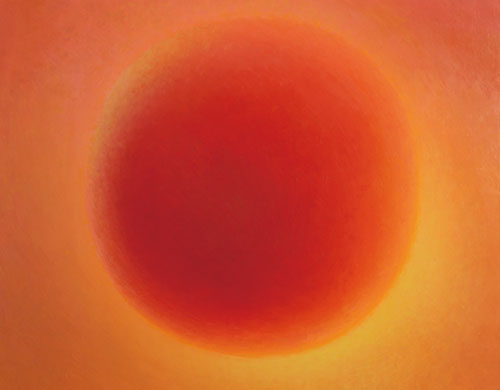 Since the birth of the quantum computer, the way quantum acts became a hot topic.
It is said that misty ambiguous being called quantum comprises the whole immense universe from micro to macro.
Accordingly, the world we sense is nothing but 2-dimensional information projected onto our perception as 3-dimensional existence due to quantum entanglement.
If quantum froze and everything in the world became a 2-dimensional state, how would the image appear to us?
Tamie Okuyama 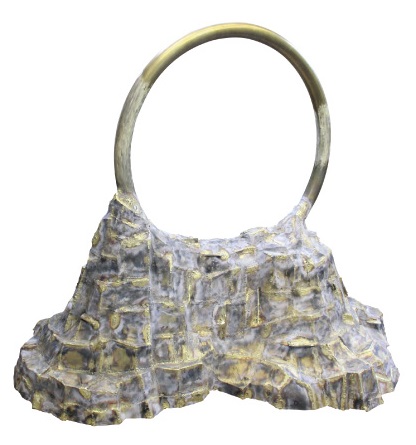 We hold a solo exhibition of Kikuma Mochizuki who is a metal sculptor creating a number of public art all over Japan. This time, we display artworks related to the three main artworks including the first artwork of “Destruction Series”, a work that was named by a Journalist at that time and became the starting point for him to get into the world of art, “META-SHOCK” 1971, the final work of MFA course at Tokyo University of the Arts which was awarded Salon de Printemps prize and received a favorable reputation in the foreign exhibition of Japan Art Festival, and also the latest artwork  “Shine ⋅ Link” 2020 that was developed from recent "Awakening Device Series".
The exhibition is comprised of about 50 artworks such as flat artworks in which pictorial elements are emphasized over time as a continuum of Metal Drawing Series that was started to express the concept of “Destruction Series”,
sculptural and flat works that reflect his recent freewheeling situation without restraints “as he pleases”, the trophy of "Tamori Cup" which was discontinued later. We would be grateful if you see - Past and Present - the path of the art of Kikuma Mochizuki over half of a century. 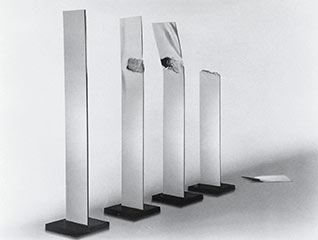 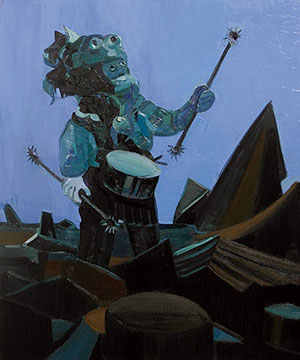 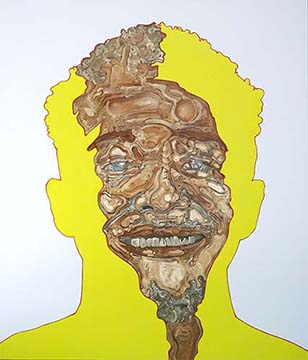 Field of Now exhibition marks the 27th time this year. This exhibition is a special exhibition that is hosted only for 4 days a year to introduce young noticeable artists selected by artist dealers who belong to the youth group of our association.

Mizoe Art Gallery introduces two artists.
The first one is Nami Shibata who is holding her solo exhibition in our gallery this autumn. Her representative series “Montage” that manifests “portraits of nobody” expresses identical worldview with the spirit and vibrant brushstrokes of the artist beyond the notion of concept and motif.
The second artist is Takashi Yatouji. The fresh and vivid scene that seems to display geometric questions. His artworks created by reconstructing motif using unique lines and colour fields give so strong impression that sticks in our memories to indicate the birth of brand new artistic expression.

12 artists are selected by 8 galleries including our gallery to exhibit a number of expressive artworks. Please see the works by spirited artists who are highly expected for further activities. We are sincerely waiting for your visit. 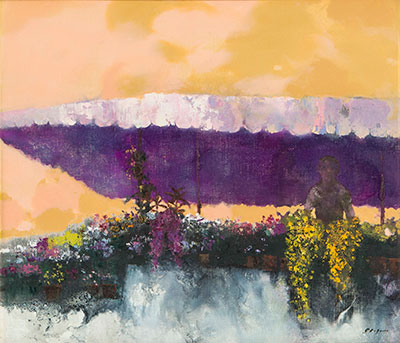 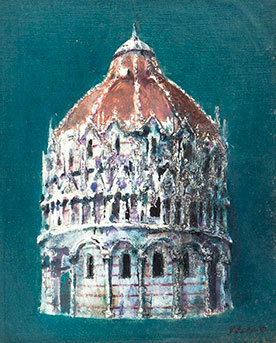 The imaginary landscape that seems to close in on the essence of the objects in a simplified image. I was attracted at the first glance in the emotional, serene, and poetic world that moves my mind. While I followed the track of the artist to know what kind of person he was, I got to know he was a person of integrity whom everyone admired. Quiet, thoughtful, and warm. He trained the younger at Kitakyushu Free Painting Atelier and the College of Art at Nihon University. People who have been under his tutelage praise his character unanimously.
This exhibition will show about 25 artworks we collected thinking of the artist who I wanted to meet for once. We are waiting for your visit. 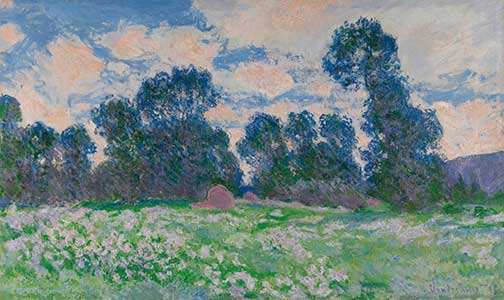 10am – 6pm
Open every day during the exhibition.

Setsubun has passed and we feel the coming of spring these days. We hold Spring Masterpieces Exhibition to feature specially selected artworks befitting the time to welcome the first Spring of Reiwa with you.
As the special display, Prairie, Cloudy Sky, an oil painting by Claude Monet, will be exhibited to be shown for the first time in Western Japan. This is a symbolic work depicting the idyllic rural landscape surrounding the house at Giverny where Monet moved to painted with the expression of unique atmosphere and texture of light. Moreover, we exhibit 30 and a few more artworks including those by artists who represent Japanese modern and contemporary artists.
We are waiting for your visit. 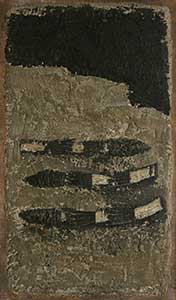 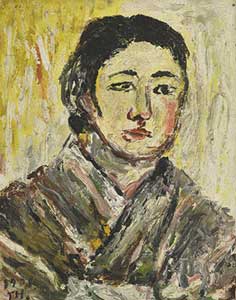 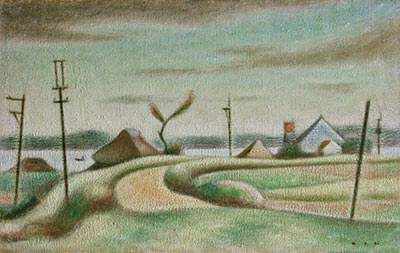 Mizoe Art Gallery is going to exhibit in VOLTA NY 2020 which has been held in New York since 2008.
We will be exhibiting works by two Japanese artists: Tamie OKUYAMA and Kenpei YUNDE.

Tamie OKUYAMA’s specialty is the work of “sun”.
With her distinctive sight toward the life and nature mystery, she combines her sense and technique into the extraordinary and deep screen.
You surely cannot take your eyes off from her mysterious works, which is also full of love.
Kenpei YUNDE focuses on the “soil”, which is usually under our feet, to catch and express the base of the human activity.
His specific painting style, repeating the process of glazing and scraping more than 50 layers through one year, shows us the dynamic and heartwarming world in his painting. 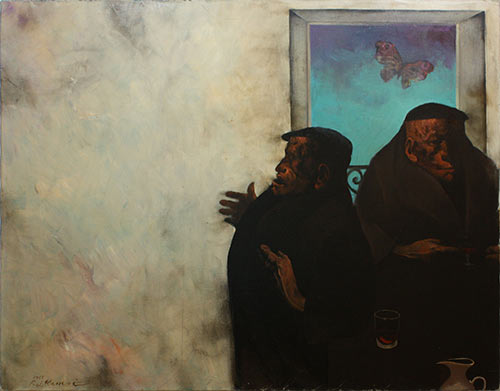 The 35th Anniversary of the Death
Rey CAMOY Exhibition
January 18th (Sat) – February 2nd (Sun), 2020
10am – 6pm ＊Open every day during the exhibition.

Rey Camoy who ended his life at the age of 57 thirty five years ago. He faced themes that are universal among people including life and death, getting old, loneliness, and love. The pieces of his artworks the style of which seems to gouge out inside of objects still do not stop attracting many people across generations.
What did the painter look at and wanted to tell us who flamboyantly run through his life while struggling between despair and hope?
We hope this exhibition consisting of 15 works becomes an opportunity to face Rey Camoy, the lone painter again.
We are waiting for your visits to our gallery.

Rey CAMOY: Born in Kanazawa, Ishikawa in 1928. (Legally domiciled in Nagasaki.) Graduated from Kanazawa College of Art. Merit Award in the Showakai Exhibition. Minister of Education Award in the Niki Exhibition. The 12th Yasui Award. A member of Nikikai. Solo Exhibition in the United States. Died in Kobe in 1985. 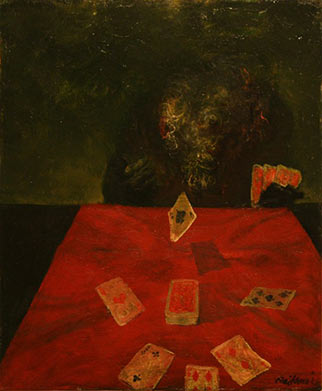 The first special exhibition of 2020 is a solo exhibition of Kikuma Mochizuki who is known for sculptures using metal. Kikuma Mochizuki has created a number of symbolic series such as "Destruction Series", "Awakening Device Series", and “Metal Drawing" besides over 130 works of public art. The new work “Shine, Link” brings the futuristic scene into the garden of MIZOE ART GALLERY TOKYO with a theme of a shining future that is born and rise from wild earth. You can see the path of the sculptor, Kikuma Mochizuki from his past artworks to unseen works and new ones including an unpublished artwork "Shine ⋅ Peak" created by an orthodox method, the small remake of “Destruction series" with austere and simple expression that was a starting point as a sculptor, and "Tamori Cup" trophy which has got public attention. We are sincerely waiting for your visits to our gallery. (Kazunobu Abe, MIZOE ART GALLERY) 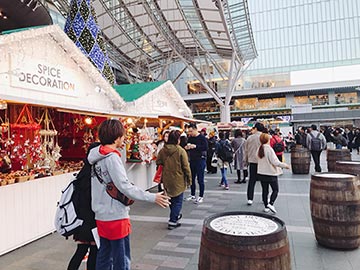 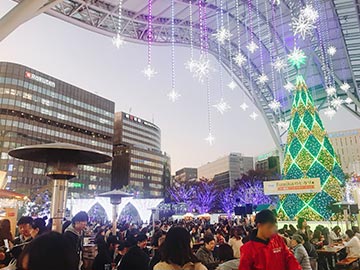 Mizoe Art Gallery will exhibit at “Christmas Market in Hikari no Machi Hakata” that is becoming a part of the wintry scene of Fukuoka. With the theme of " Together with This City Forever ", this event is held to wish for the happiness of as many visitors as possible when they go home. To offer suitable artworks for heartwarming Christmas gifts, we will display specially selected paintings at a hut. Please drop by the Christmas Market at Hahata Station Square when you go to Hakata Station during the event. There will also be hot wine and shops at other stores nearby.
We are sincerely waiting for your visits at the lively venue.
Open time:
Week days 16:45-23:00 / Sun 12:00-23:00
Fri 16:45-23:30 / Sat 12:00-23:30 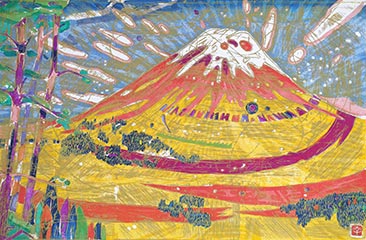 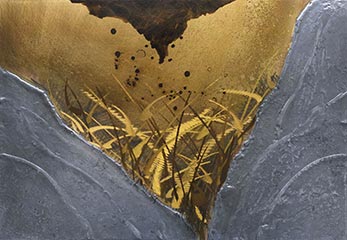 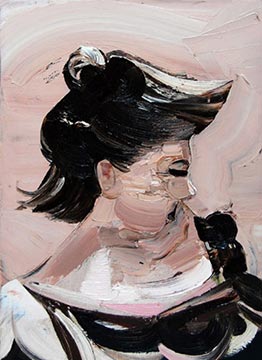 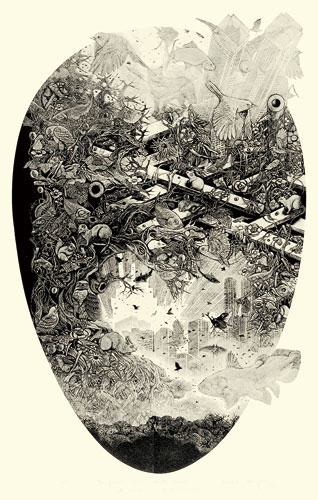 If it is the first time you see the artworks of Keisei Kobayashi, you may be surprised to know they were created by wood print. The extremely minute depiction goes beyond the general idea of a wood print.
〈Wood Engraving〉The technique invented in the late 18th century which cut tough wood in round slices (cross-section) and curve it by a burin and a chisel to make further elaborate and exquisite expressions. Although I understand the explanation in my head, the artwork in front of my eyes does not stop surprising and making me stare in every corner of the world that is both decadent and paradisiacal.
Betraying the common knowledge that wood engraving is confined within small size, his artworks reach the maximum of 3M which was enabled by trial and error to enlarge the technique succeeded since the 1700s.

This exhibition will display self-selected artworks looking back at his art practices. The display configuration including large artworks will be worth seeing. It is great pleasure that we can hold a display to show the whole picture of Keisei Kobayashi's artworks in here at Fukuoka. You will not regret coming.

Keisei KOBAYASHI/Born in Shimane Prefecture in 1944, lives in Tokyo. A professor emeritus at Tama Art University. Purchased by the Agency for Cultural Affairs as an excellent artwork (Time for Ressurection S62・8-). Bronze award at Beijing International Print Biennial. The Yamaguchi Gen Grand Prize. "Leonardo Sciascia, amateur d’estampes” Prize. The Medal with Purple Ribbon from the Japanese Government.
Many of his artworks are collected by institutions including the National Museum of Modern Art, Tokyo and International Centre of Graphic Arts at Ljubljana.
(24 Oct 2019)